Dependency Injection and You 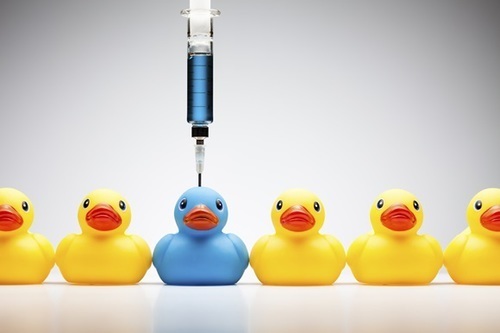 Dependency Injection is a term you may have heard come out of the mouth of the hipster-programmer in front of you in line at a popular chain coffee shop. The term sounds fancier than a sampler plate with seared foie gras, Australian black truffles, and gruyere biscuits. But, what is it? Dependency Injection is a software design pattern where an object’s dependencies are injected through other pieces of code. James Shore gives a concise if not slightly amusing definition in his blog post. "Dependency Injection is a 25-dollar term for a 5-cent concept. […] Dependency injection means giving an object its instance variables.” Wait, is that really it? Basically, yes.

Here is an example of a class that does not use Dependency Injection.

As you can see, the “dependency”, OtherObject, is “injected” as a parameter to MyObject’s constructor method. What a simple example for such a pretentious sounding programming practice.

Let’s go over an example of this. Say you have a class, FeedController, that handles a list of Posts provided through some API component. You then create an interface, let’s call it PostProvider, that has a method, getPosts, that returns a list of Posts. The FeedController class would then call a PostProvider’s getPosts method to set the postList.

This now allows you to inject different PostProviders to display different Posts from different sources and the FeedController does not care where the Posts comes from.

Dependency Injection allows the components of an application to be reused with ease. It also removes each component’s responsibility to obtain it’s own resources by delegating tasks to other specialized components. Because of this, components are now loosely-coupled which allows them to be interchanged. There are several Dependency Injecting frameworks available such as Square’s Dagger and Google’s Guice. I encourage you to check them out if you want to learn more.